We’re excited to welcome you to Jumping Goat Ranch in the Texas Wine Country. This is our little slice of Heaven in the Texas Hill Country.

The Texas Hill Country is truly magical and there is no better place to experience it first hand than Fredericksburg.

Fredericksburg came into existence on May 8, 1846 when 120 men, women and children arrived in 20 wagons and two-wheeled Mexican carts. Disease and Comanche Indians where huge threats and both did considerable destruction in the early years. A year later, in May of 1847, after months of negotiation, John O. Meusebach, the then current commissioner general, signed a peace treaty with the Comanches which relieved the “town” of one of the most dangerous threats of living on the frontier. In exchange for $3,000 in gifts, the Comanche agreed not to harm the pioneers. The Comanche apparently adhered to the agreement, making the treaty the only one in Texas that was kept by both Native Americans and white men.

Meusebach’s peace-keeping mission sparked one popular tradition, which came to be known as the Fredericksburg Easter Fires. The Comanche set fires to use as signals of a threat, but because the pioneers had come in peace, the fires burned high instead of using them for smoke signals of distress. To ease the fears of the Fredericksburg children, who wondered why the fires were burning in the area, a story was concocted: The Easter rabbit had built the fires to cook and dye his Easter eggs. The settlers vowed to burn the Easter fires every year that the peace treaty was honored. More than 150 years later, the fires still burn every Easter eve.

In 1861, when most Texas counties voted to secede, the largest majority of Gillespie County (Fredericksburg being the county seat) voted against it for fear that secession would mean war, and war would most likely remove their current protections from indian attacks as well as have significant impact in terms of loss of their major market for local products. The drovers from Fredericksburg found ways to stay busy, which included driving for the Confederate Army and running cotton to Mexico. The war actually helped create the Texas-Mexico cotton connection.

Starting 1874 there was interest in bringing the railroad. With many failed attempts, they finally were able to celebrate the arrival of their first railcar into Fredericksburg on November 11, 1913.

Jumping Goat Ranch and the Hermit of the Hill

Jumping Goat Ranch has ties to the earliest days of Fredericksburg, by way of Peter Berg, better know as Hermit of the Hill. Peter came to the area from Coblenz Germany. He was an accomplished coppersmith and stonemason, and made copper vessels for a friend to use on his farm. He starting tinkering and making vessels for the making of liquor. He built his first still on a cliff at the side of Baron’s Creek in town, but authorities knowing he didn’t have a license destroyed it. He returned to his friends farm, who gave him a small piece of land, that is about 1.5 miles west of The Jumping Goat Ranch, at the end of Hermit Hill Rd. Peter built another still in a cave in the side of a ravine and then built a hut on top for him to live in. Peter was a master at stone work and built a tower that he used to star gaze and to predict the weather. He did some of the earliest rock work in the area, with some of it still standing.

Peter’s whiskies are said to have rivaled the best Kentucky could make, and he would sell them along with his wine on Sunday afternoons outside the coffee mill church. Berg always boasted about his beautiful fiancee who would soon come over from Germany to marry him. He sent her money to pay for her trip, knowing it would be a long wait until he would finally see her. After many weeks of waiting, a teamster from Indianola, the place she was to land, brought Peter the news that his fiancee had married someone else very shortly after arriving. There had been so many suitors along with harrowing stories of the atrocities by the Indians as well as the dangers of the long trip to Fredericksburg, that she decided to stay in Indianola and marry another suitor. Upon the news and being so heartbroken, Peter Berg withdrew to his cave and for there forward lived the life of a hermit. He continued to sell his wine and whiskey, but just off the side of RR1631. When you turn onto Hermit Hill Road off of RR1631 if you look to your left you can see the remains of a stonewall that is believed to be one that Peter built and where he sold his wine and whiskey. He was not a hostile man and welcomed his customers who were willing to make the trip out and sold his wine and whiskey for 30 cents a gallon.

Though filled with sorrow and disappointment over the loss of his fiancee, and even though he had actually become quite deaf, he still fulfilled his dream of playing an organ. With no organ available, Peter actually built one out of newspaper and cardboard. It is said by people who heard him play, that his paper instrument made decent music. Though he did not wish to receive it, the county gave him a pension of $8 a month. He never spend any of it, nor did he put it in the bank. It wasn’t until after his death that anyone knew what he did with all of it. Berg often told people that he dreaded the day when he could no longer work, that he didn’t want to be a burden on anyone and would ensure that he never became one. He made good on that promise as the gunshot was not heard when he killed himself, but smoke was seen from the fire it started in his hut. Once put out, the pension money was found intact behind a loose stone in the wall. They also found some of the money in the bottom of a trunk that has survived the fire. From this money Peter was given a decent burial. 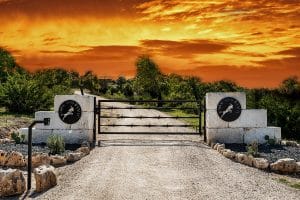 We’re excited to welcome you to Jumping Goat Ranch in the Texas Wine Country. This is our little slice of Heaven in the Texas Hill

Subscribe to our newsletter for updates on Jumping Goat Ranch

Our mission is to provide a memorable experience for our guests by offering them a place to relax, play, self-reflect and recharge in the beauty of Texas Wine Country.

Can we help you? Email us: questions@jumpinggoatranch.com